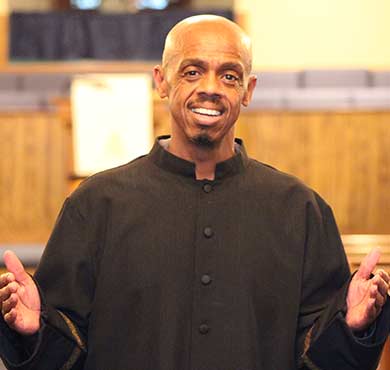 Pastor LaVelle McCray is the son of the late Walter Jr. and Mary Bennett McCray, of Taylors, SC. He is a member of the Mount Sinai Missionary Baptist Church where Dr. Toney Parks is pastor. While at Mount Sinai Missionary Baptist Church, he served as associate minister and Minister of Christian Education and various other ministries: Chairman of the Deacon's Ministry, a worship leader and praise team member, Sunday school teacher, Missionary and Brotherhood member, Bible Study teacher. He helped wherever there was a need for ministry.

He was united in holy matrimony on July 3, 1999, to the late Pamela Scott McCray. He is the father of one daughter, MacKenzie McCray.

Pastor McCray is a graduate of Wade Hampton High School. From there, he attended Central Wesleyan College, where he earned a B.A. Degree in English Education. After teaching several years in the Greenville County School District, he felt the need to help on a different level. He then received a Master's of Education Degree in Administration and Supervision from Clemson University. Pastor McCray's educational leadership experiences have afforded him the privilege to serve as assistant principals of Hollis Academy and J.L. Mann High Academy of Science, Mathematics and Technology and principal of East North Street Academy of Mathematics and Science and Pelham Road Elementary schools.

Pastor McCray enjoys preaching and teaching and worshipping God and spending time with his family and friend; he loves working with young people as they embark on becoming educators at North Greenville University, Tigerville, SC.

In November of 2005, he accepted the call to proclaim God's word. In April 2006, he was licensed to preach the Gospel. He is now a student at Erskine Theological Seminary, pursuing a Master's in Divinity degree. June of 2007, he was called to be the pastor of the Rocky Mount Missionary Baptist Church, where they believe in being Bible-based, Christ-Centered and Holy-Spirit led, serving God in Excellence, through building Relationships, being Obedient, having Charity and receiving Knowledge- the ROCK!

We call ourselves "TEAM-ROCK" You will find some Teaching, Evangelizing, Assistance and Ministry!

Pastor McCray is active in the Enoree River Congress of Christian Education, where he presently serves as the First Vice president of the Congress. He has served as Dean, Director General and teacher of the congress. He was a member of the Pleasantburg Rotary, and member of the South Carolina Association of School Administrators; He's a member of the Gamma Gamma Lambda Chapter of the Alpha Phi Alpha Fraternity, which embodies the fact that its members must be First of all; Servant of all; and transcend all.

All in all, Pastor McCray's main goal is "to be a man after God's own heart and to be known as a man who loved his wife as Christ loved the Church and gave himself for it, also, known for bringing up his child in the nurture and admonition of the Lord."